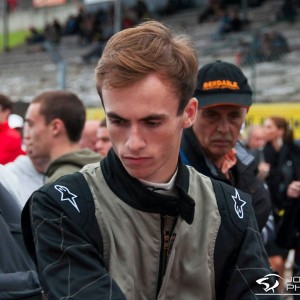 Sunday March 13 2005, at the age of 10, on the initiative of my cousin Dominic, I went karting for the very first time at JPR in Sint-Niklaas. That little initiative from my cousin has become a life deciding passion…

From that moment on, I went to JPR twice a month on Sunday morning to follow their kids lessons where I learned the basics of karting thanks to the skilled instructors from JPR.

On December 16th 2005 (on my 11th birthday!), I drove my very first race. After that race the competition feeling arose in me, which made me decide to participate in all races organized by 4ever karting until they decided to stop after a few very successful years.

I was asked to compete in the KIDS F1 Challenge in 2006 where I was classified in the fastest series (pro’s). I managed to win the championship in the end!

In 2007, I participated again in the KIDS F1 Challenge in the “pro’s” series. Despite missing a race because of other commitments, I managed to win my second title! That year I also started exploring outdoor tracks (Antwerp karting, Eindhoven, Francorchamps, Genk,…) with my own private kart together with my good friend Filip Brkic.

It all started outdoor with a free entry I had won after winning a 4ever karting race. Together with two other winners I received technical support from JPR when we participated in a BEKC race in Amsterdam, a circuit which now sadly doesn’t exist anymore.
This participation made me decide to go for a new challenge. I decided to do a complete season in the BEKC championship in the Honda Junior class.

So in 2008 I drove together with Mathieu Collin in the BEKC Honda Junior class. After five races the collaboration stopped between us after accumulating incidents, however, we were comfortably leading the championship. At that moment, we had won four out of five races. I decided to drive the last two races with my own private kart. I won the penultimate race in the rain at Spa after dominating from start to finish. During the season final, things were also looking very good until an error of the organization cost me an almost certain victory.

I drove the BEKC championship in 2009 together with Brian Cuyvers in the Honda Senior class where we ended second! That year I also started training with my Rotax Max Junior on different Belgian and Dutch tracks.

2010 was also a training year with the Rotax Max Junior because the funds to compete in an outdoor championship were missing. Besides those trainings/test days I decided to participate in the Belkart championship in the Masters class. I finished the 2010-2011 season in third position.

In 2011 quite a lot of things changed. I drove my first 24 hour race (24 hours of Brussels) and reached the final of the Redbull kartfight. I would’ve loved to participate in the Indoor Karting World Championship in Eupen but the high minimum weight (90kg) made that impossible for me.

The 2012 season was even more busy than 2011. I became Belgian champion for the very first time in the Belkart Masters class! I drove the 24 hours of Brussels and Olen where we ended on a sixth and third place respectively. At the World Championship indoor karting in Essen I probably had the toughest week in my career so far. I didn’t like the track at all and this in combination with a lot of bad luck and too much personal errors resulted in a 50th position overall on 111 participants.
In the fall of 2012, I managed to qualify myself for the RACB National Team final in Le Mans. Despite having made the most progression of all finalist, I didn’t take home the win which would’ve giving me an entry and full RACB support in the French Formula 4 single seater championship.

At the start of the 2013 season, thanks to Special Open Trophy, I got the chance to make my motorsport debut. During the first raceweekend in April at Spa, I managed to take pole and win my very first race. Besides motorsport I drove a couple of 24 hour races in karting such as the 24 hours of Brussels, Olen and Eupen. We won the ‘fun’ class in Eupen and in Olen we took our second consecutive podium.

In 2014 I took part in the GT Academy program organized by Sony and Nissan. I won the national final in Spa and became second in the European final after a good portion of bad luck. That report will be translated in English as soon as possible.
A month after my GT Academy campaign I got the amazing chance to participate in the 24 hours of Zolder with a Honda S2000 prepared by Force Racing. I set the car on pole in our class but due to a lot of mechanical problems we fell back quite a lot in the race. Even though we didn’t get a good result out of that race, I could impress quite a lot of people with my raw pace. That year I did some karting 24 hour races as well. We became fourth in the 24 hours of Brussels, third in the 24 hours of Olen and 7th in the 24 hours of Eupen. Furthermore I drove my first international 24 hour race, the 24 hours of Kartpetania in Spain. We ended outside the top 10 after having lost more than 2 hours in the pit with mechanical issues.

2015 was my first complete season in motorsport. I shared a BMW 325i together with Bernard Claes in the BMW Clubsport Trophy where we defended the colors of DZ Competition. We missed the title by only two points after a couple of very dominant wins. We won three races, set four fastest laps (a new laprecord at Zandvoort!) and set one pole position.

As 2015 was incredibly busy, 2016 was a lot quieter. I did a test day with a Renault Clio Cup and drove the 24 hours of Zolder again with a BMW Clubsport Trophy together with Jimmy De Breucker, Bart van Haeren and my 2015 teammate Bernard Claes. We ended second after an incredible catch up as we lost 40 minutes in the beginning of the race with a broken radiator. Without a doubt my favorite moment of 2016. I drove some karting races as well where I got on the podium six out of nine races.

Between 2017 and 2019 I got the opportunity to complete full seasons in Belcar Series with a Radical SR5 run by Oracle Cars. The car was entered in the Belcar 2 class in the Belcar Endurance Championship where I shared the car with Eric Wouters, Jamie Morrow and Raf Van Belle.